Today we began the day by looking at the previous day's blog. From there, we moved onto pg. 5 where began discussing a half-life and radioactive decay.

A half-life is the amount of time it takes for one-half of a radioactive substance to decay. A half-life can vary in time from a few minutes to millions of years. A majority of radioactive substances decay through radioactive decay which we discussed earlier this weak. Some radioactive decays include: gamma decay, alpha decay, and beta decay. If you wanted to represent this decay in a chemical equation, you do the process that we have covered earlier this weak. For example, in #1, if hydrogen-3 were to decay through beta emission process, it would be represented as:

After completing problem 1 and graphing it, we continued on throught the rest of the page. 2A is the same as number one, but 2B is different. Because we know that the half-life is 6, after 6 minutes the percent present is reduced by half, therefore it is 50%. After 12 minutes, the percent present is 25%. This pattern can continue on for ever. Therefore the anser to number 2B is .0976 because after 1 hour of 10, 6 minute half-life's, only .0976% of the substance remains.
For 2C, the equation can be written as N=No*(.5)^n. This can be determined because No represents the mass of the starting substance, while n represents the number of half-life's. By taking .5 to the n'th power, you are accounting for the fact that after each half life you are decreasing the original substance by 50%. Finally, you multiply it by No, in order to find the final mass. Using this equation, we can solve question 3.

After covering this new material, we proceeded on to a lab, where we were told to find the half-life of a substance by watching it radioactively decay. We performed this by placing cesium-237 into a radioactive detector and recorded its radioactivity every half minute. With this information, we were told to make a scatter plot and determine the substances half-life.
Posted by Daniel W. at 11:54 AM No comments:

Today in class we started the topic of Nuclear Bombardment. The main idea that Nuclear transmutations can occur spontaneously or artificially. If it happens artificially there is usually some form of bombardment occurring. There are many examples on page 4. We finished 1-6. 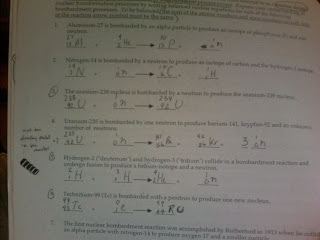 After we finished up with the packet we started on our lab. Our lab was on Radioactivity and Shielding. In it we had see what shields worked best against blocking beta particles and gamma rays. Then once we got that data we had to see which type of radiation did a better job of penetrating through the shields. After we collected all of our data we had an easy reading quiz that consisted of problems one could find on pages 2 and 3 of the packet.
Posted by Anthony Ivankovich at 5:13 PM No comments:

Today we had a quick reminder that we are in fact still in school and not on vacation yet. We started off class with reading graces blog and going over concepts we learned Friday. Mr. Henderson made some announcements that the webassigns are no longer going to be graded, they are only for learning the material and going over what we learned in class. He also told us we aren't going to be using our lab notebooks anymore. We also got our quizzes back. Then we started on page two and three in our packets, after that a quick lab and the day was over. 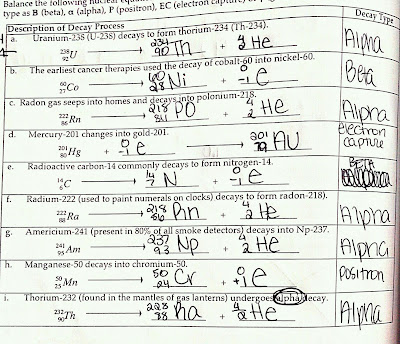 On page two we learned a easy new concept, which we used notes on the board to help us with. First of all we learned that when something decays the left side and right side atomic number and mass number have to be equal. So when we do number 7A on page two we use the question to figure out what it decays to. We write out the isotopic symbol for it and obviously the atomic mass and atomic number are not equal. So we determine the difference and start writing a second isotopic symbol. We find out the elemental symbol from the notes on the board. Ex. Uranioum-238 decays to form Thorium 234. We already have uranium there ready for us so we start on Thorium. Thoriums' atomic number is 90 and its atomic mass number is 234. the difference in mass is 4 and the difference for atomic number is 2. Then from using the notes on the board we determine the elemental symbol which is helium and the decay type, which is alpha. we finished the page and moved on to page 3. 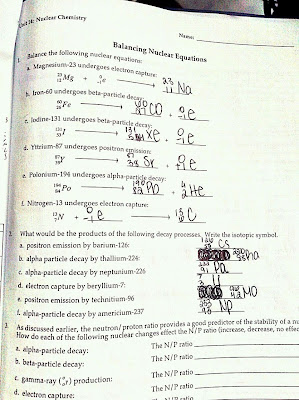 For page three Mr. Henderson had us in our lab groups do a certain number then go up to the board and tell the class the answer and how you did it. If you weren't there then sucks for you. But the way you do number one is almost the same way as on page two, except you have the decay type instead of the element it turns into. To figure these our you first write down the elemental symbol for the decay type and set each number (atomic number or mass number) equal and put an X for the missing element we dont know. Then using the PT we figure out the element with the atomic number. For number two its doing everything we just learned but in our heads. All you write down is the isotopic symbol for the element it decays into.
After that we did a quick lab, it was a lab to test if the farther you are away the less radiation you can get. Mr. Henderson had the radiation particle testers out for five minutes before we did our lab to get the background count, for mine it was 123 which we converted to 12 particles every ten seconds or so. We then tested the radation disc from a couple slots under the detector. My data was : 7492, 2385, 1101, 673 and 417. but we then had to subtract the background radiation number which made my data: 7480, 2373, 1089, 661 and 405. We then plotted the data on a little graph and wrote the conclusion.
That was our great day in chemistry. byebye
Posted by Daria Dlouchy at 5:32 PM No comments:

We started off the class with Mr. H telling us a story about how his wife gave him a salad in a bowl giving off radiation. He then proceeded to show us by using this device [I don't know what it's called...] and pointing it at the bowl. Basically, it beeps when it detects it. He pointed it at everyone in the class and the people who were giving off a lot of radiation were Matt, Dmitry, Kevin, and Emma. Mr. H told Emma to make her own Chemistry blog because of the great blog she posted the day before. If you need a good resource, look at Emma's blog.
He then talked about how finals were in 7 days. There is going to be a review day the Tuesday before finals start.
We turned to page 1 to start off the lesson of the day. Mr. H explained to us that radiation is everywhere. Even though when the news talks about radioactive substances, it's not going to be deadly because those amounts wouldn't kill you. He gave us examples like the sun giving off radiation, but the atmosphere absorbs much of them so we aren't harmed by it. He also told us a story about a guy who took a radiation detector on his trip to Hong Kong, Japan, and back to the US and the data showed that the places the radiation detector went nuts on was when he was in the airplane. We can conclude that we are safer on the ground than in the air.
So, page 1, numbers 1, 2 and 3 were all review questions from Unit 2.
Atomic number: number of protons, identifying number
Mass number: number of protons and neutrons
Isotope: form of an atom of an element
Nuclide: nucleus of an atom
2. El is the symbol for the element
A is the mass number
Z is the atomic number or the number of protons.
This was all review so I'm not going to go over it but the answers are as follows for number 3.
Lithium-7: 3, 7, 3, 4
Carbon-14: 6, 14, 6, 8
Lead-210: 82, 210, 82, 138
Uranium-238: 92, 238, 92, 146
#4. a. 1 b. 1.5 c. 83
For number 4, you are supposed to use the chart on the right. The explanation for letter a is that when the proton count is lower(<20), there is a 1:1 ratio between the protons and the neutrons. When the proton count is higher(>20, the neutron count also gets higher. The ratio is about 1:1.5. Then, when the atomic number is at 83 or higher, the element is considered radioactive. In the chart, the elements that are not radioactive are represented by dots. When it is radio active, there are no more dots.
We turned to page 2 and worked on number 6 for the end of the class. Mr. H explained the different types of radioactive decay. Beta decay are high speed electrons and don't get through the skin. Alpha decay also doesn't get through the skin and has a helium nucleus. Positron emission is an anti electron and gamma decay is a high energy light particle. The answers go as follows:
a. beta
b. alpha
c. positron
d. positron
e. gamma
f. alpha
g. gamma
h. beta, alpha
i. alpha
j. electron capture, beta
k. gamma, alpha
l. gamma
We ended the class with that page. Have a great three-day weekend!
Posted by Grace Lee at 4:28 PM No comments:

Visit our Delicious Bookmarks to assist in your learning and test preparation:

We are still experimenting with our class photos and videos in an effort to place them at a site where the scribed can save them and upload them to our blog. Friday's photos (9/3) have been uploaded to DropShots - another photo sharing site. Log in with "gbs" as the password to view photos. Right click to save photos to your computer and to upload them to your post. As for videos, I'm still working on it. Visit

Pages from "Our Book"

More to Come (by unit's end)